Why Invitation Design is Important

This beginning post isn’t really about invitations, per se. It is about how what may become the most infamous design flaw in the print world ruined such an important and special moment for many people anticipating a crowning achievement in their careers. This story highlights the importance of a good, functional design and demonstrates why function and clarity are more important that looks.

It’s Oscar Sunday, 2017, Hollywood’s most important night of the year. They save the biggest and most anticipated Oscar for the end of the show: BEST PICTURE. Anticipation builds throughout the evening, and the moment everyone is waiting for arrives.

To add to the drama of the moment, two iconic stars, Warren Beatty and Faye Dunaway, open the envelope and announce the winner for Best Picture. Actors, producers and others involved with the winning film come up on stage. Acceptance speeches are given. Then, in what is perhaps the oddest and most surreal moment in Academy Awards history, utter confusion ensues and the REAL winner is unceremoniously revealed.

It’s a chaotic and embarrassing scene as it becomes apparent that the presenters were handed the wrong envelope. The protocols that surround this process are well known and strictly adhered to, so how could this happen?

Well, it seems the Academy of Motion Pictures Arts and Sciences took the design process in house this year. And while they may have created an envelope that looked beautiful, it seems their graphic designers did not take into account the whole purpose of design: to be functional. And part of being functional, especially when billions of people are watching and Hollywood careers are on the line, is to be clear and to have what is known in the engineering field as redundancy. Clarity imparts the necessary information. Redundancy ensures that if your system fails, you have a reliable backup.

The protocols protecting the secrecy of the winners of the Academy Awards are well documented. Here’s a short video that explains some of the detailed protocols employed: Academy Awards Ballot Process. However, it seems the designers of this year’s Academy Award envelopes failed to build redundancy and clarity into the envelope design itself, measures that could have minimized the possibility of handing the presenter the wrong envelope.

This year’s Oscar envelope was red with small gold writing on the outside. There are two issues with this. First, in the hustle and bustle that occurs backstage at the Oscars, it is easy to misread small print. Second, gold on red does not offer much contrast, and with unknown and changing lighting conditions, it is important that the print be legible and easy to read. Metallic gold foil can be difficult to read in low light situations because of the reflection of the light on the text. 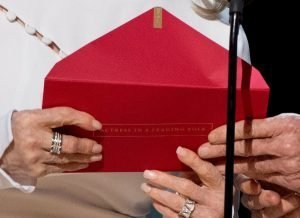 Compare this year’s design (above) to last year’s envelope (below). Several design elements intended to ensure clarity are immediately apparent. On last year’s envelope, the text is written in large black print on a light background. This makes it far easier to read in both low and bright lighting. Further, the category is printed on both the front AND the back of the envelope. This makes it much easier for everyone involved in handling that envelope to make sure the correct envelope is handed to the presenters. So if the person doesn’t read the front of the envelope correctly, the same information is printed on the back. 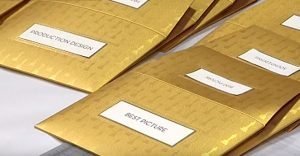 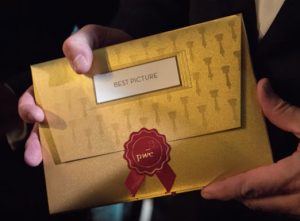 In the words of Marc Friedland of Couture Communications of Los Angeles, the man who designed the Oscar envelopes from 2011 – 2016, the primary goal of the envelope is to make it “dummy proof.” By building redundancy and clarity into the design, mistakes are minimized.

So while the visual appeal is important, if the wrong envelope is handed to the presenter, it won’t matter how beautiful the envelope is. It has to function properly, and that includes making sure the correct envelope is easily identifiable in the first place.

For more information about what went wrong at the 2017 Academy Awards, here’s an article about the snafu: 2017 Oscars Envelope Mistake

The concepts of clarity and redundancy are just as important in invitation design. You want to make sure your invitation is clear to the reader. Read it from your guest’s perspective, not your own. Does it say who it’s from, does it have the correct date, is the time correct (a.m. vs. p.m.), is the venue accurate so your guests know where to go? All of these details matter. It’s about being clear.

And there are ways to build in redundancy, too. For example, numbering each RSVP card ensures that you know who the response is from even if your guests forget to write their names. You can also pre-print your guests’ names directly on the RSVP cards.

For assistance in designing the envelopes and invitations for your next event, contact Invitation Maven at [email protected].